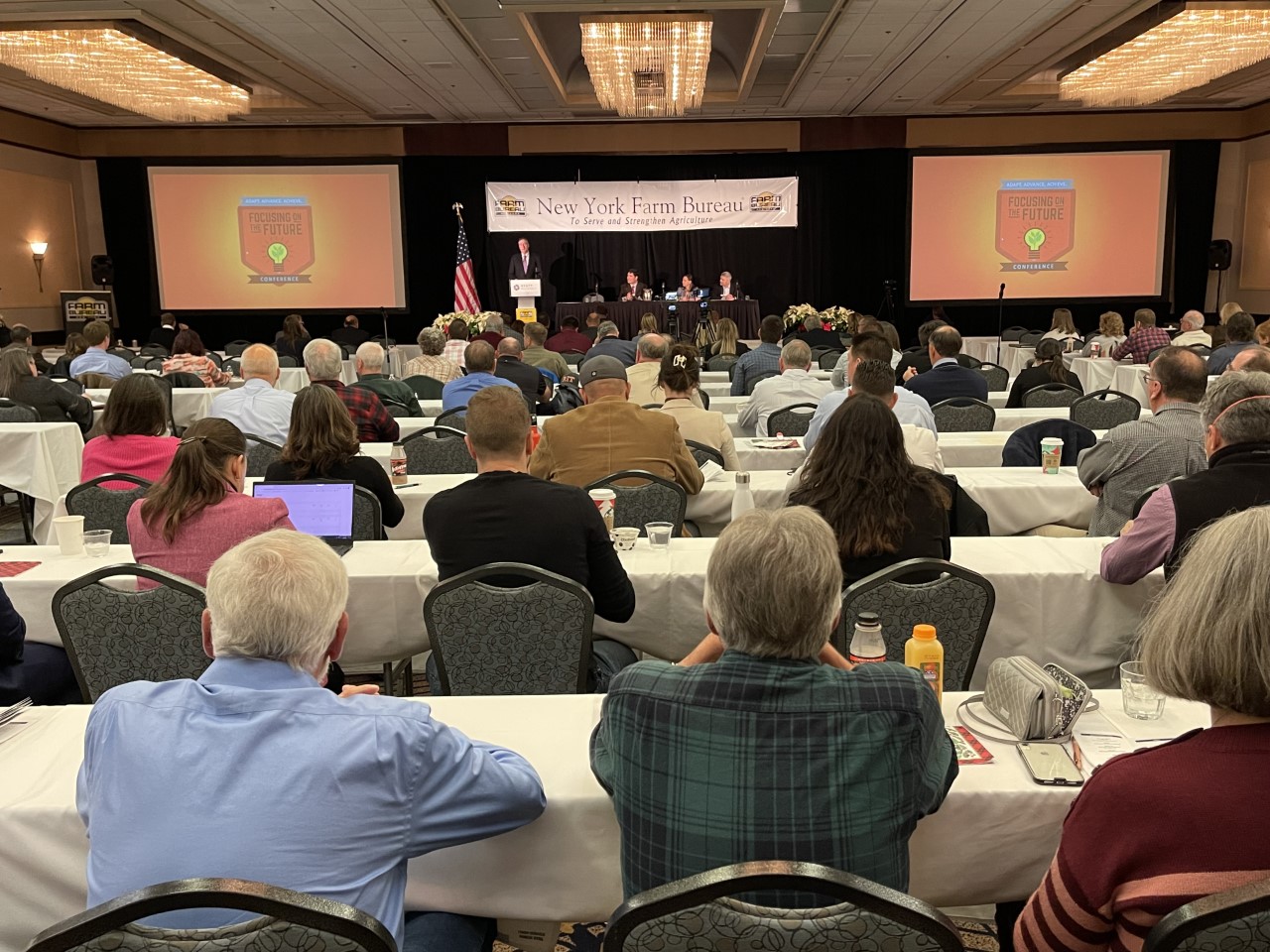 State Annual Meeting is the culmination of the strong grassroots process where farmer members create, discuss, and determine the policy positions that New York Farm Bureau advocates for at the state and federal levels. Among the dozens of new public policy resolutions, delegates approved a new chapter to the policy book on urban agriculture.

“New York Farm Bureau looked forward at State Annual Meeting with policy positions that will help our members confront major challenges and opportunities in agriculture. The resolutions that the delegates supported address the diversity of New York State farming and will guide our advocacy that is the highly respected at the state and national levels. I am grateful for all the hard work of our members as we were able to have meaningful discussions about the future,” said David Fisher, New York Farm Bureau President.

In addition, delegates elected district representatives to the State Board of Directors.

Newly elected members are Brad Macauley for District 2. He is from Geneseo, NY and owns a diversified crop farm. Darleen Krisher-Meehan will represent District 4. She lives in Greenwood, NY and owns two agricultural retail stores and runs a cash crop farm with her family. Adam Miner of Mannsville, NY was reelected to District 6. He is a business development manager for an animal health company and produces maple syrup and other maple products. District 8 elected Paul Molesky. He lives in Clifton Park, NY, and works as a dairy nutritionist, and owns a livestock farm. Steven Smith of Schoharie, NY was elected to fill the vacancy of District 9. He is a sales manager for a dairy nutrition company and is also a livestock farmer. Tim Dressel will represent District 10. Tim lives in New Paltz, NY and grows apples and runs a hard cider business on his family’s multi-generation apple orchard. Christina Kohler, who has a poultry and egg farm with her family in Elbridge, NY, will continue as the Young Farmers and Ranchers Chair, and Bill Zalakar of Long Island Farm Bureau, who manages a greenhouse business, will chair the Promotion and Education Committee.

During the awards luncheon, Jim Bittner of Niagara County Farm Bureau received the 2022 New York Farm Bureau Distinguished Service to Agriculture Award, the organization’s highest honor. Jim is a fruit grower and runs Bittner-Singer Orchards with his family. He was honored for his longtime advocacy and involvement in support of Farm Bureau and the greater agricultural community. Zalakar received the James Quinn Award which recognizes an individual for their membership and community involvement efforts.

The New York Farm Bureau Young Farmers and Ranchers Committee recognized two competitive events award winners. The Excellence in Agriculture Award winner is Julia Hudynica from Montgomery County Farm Bureau. The Excellence in Agriculture Award is designed as an opportunity for young farmers to earn recognition while actively contributing and growing through their involvement in Farm Bureau and agriculture.  The Achievement Award went to Devon Shelmidine of Jefferson County Farm Bureau. The Achievement Award recognizes young farmers for their farming pursuits, participation and leadership within agriculture and their own community.  Both winners will represent New York Farm Bureau in January at the American Farm Bureau Federation national convention in San Juan, Puerto Rico.

Brett Sciotto, of Aimpoint Research, a global, strategic intelligence firm specializing in agri-food, gave the keynote address. He explored consumer trends, a complex food system, and how the Northeast is positioned to best capitalize on change in the agricultural industry.

Next year’s conference and State Annual Meeting will be held December 5 & 6 in Tarrytown, NY.

Some of the delegate approved public policy positions added this year include:

·       We support an incentive program for food manufacturers to buy New York-grown products.

·       We support all efforts to ensure and expand availability of excess and imperfect produce and dairy products to economically stressed people through state and federal financial and tax incentive support for harvest, packing and distribution.

·       We support expanded financial support for food pantries and grocery stores offering such produce, with the goal of creating a viable market for such produce that supports producers and all entities within the distribution system.

·       We support New York State establishing and funding a permanent Healthy School Meals for All program.

·       We support increasing New York State funding for County Law 224 Section 8 and 224B for all Cornell Cooperative Extension programs throughout the state.

·       We oppose any mandates requiring only electrical energy for new machinery and building construction.

·       We recommend that regulations implemented as part of the Climate Leadership and  Community Protection Act  not outpace the technological and economic feasibility of industry to comply using today’s readily best available and scalable technologies.

·       We recommend that NYS continue to incentivize climate smart practices, such as advanced nutrient management, cover cropping and reduced tillage, through the expansion of existing programs and/or creation of new programs.

·       We support continuing the current membership on the soil and water conservation boards of directors as defined in state statutes and continued funding in the New York State Environmental Protection Fund at current inflation-adjusted or increased levels within the inflation-adjusted, budgeted amount to the district.

·       We oppose any alteration to NYS Law that would change the mission and function of the Soil and Water Districts without input from County Boards of Supervisors, or county legislatures, New York Farm Bureau, the New York State Grange, NYS Department of Ag & Markets, and the four-way partnership (NRCS, NYACD, the State Committee, and the Employees Association) of the Soil and Water District system.

·       We support that the New York State Department of Transportation and all county and town highway departments must take into consideration modern agricultural operations and equipment when performing any road, bridge, culvert or intersection maintenance, upgrades or redesigns.

·       We support the growing importance of urban agriculture, its contribution to the agricultural economy, and need to better integrate this segment of agriculture into the wider agricultural community.

·       We support zoning and building codes that allow year-round structures and controlled environment agriculture infrastructure, as well as utilizing production techniques (e.g. raised beds, hydroponics) to address the lack of suitable farmland and high-quality soils in many urban areas.

·       We support, to the extent practical, definitions of urban agriculture that avoid potential conflicts with existing agricultural production practices, programs and laws.

·       We support the raising of livestock, aquatic species, and bees and other insects, in urban settings provided that best management practices are implemented to provide for the health and safety of animals, the environment, and public health. We support engagement by agricultural agencies and organizations in fostering research, education, and governmental engagement related to urban agricultural production.

·        We support increased funding for research to develop low GN barley varieties suited to growing in New York for use in the production of local single malt and other distilled spirit products.

·       We support allowing all farm beverage producers to ship directly to consumers in and out of state.

·       We support the elimination of Standard Time and the permanent adoption of Daylight Savings Time.

·       We support adult-use cannabis should be treated as a legitimate agricultural crop.

·       We reaffirmed that we support whole milk being promoted and advanced through the special milk program through the schools, welfare groups and the U.S. military.

·       We recommend that USDA develop standards and values for carbon sequestration that can be used by farmers so they can figure the value of their farming practices and make them available to sell without third party intervention or middlemen profit taking.

·       We recommend that all farmers that have been using sustainable practices have access to collecting/banking carbon credits in addition to those operations that are converting due to incentives through state or federal programs.

·       We recommend that farmers that are applying for carbon sequestration practices have those practices verified by Soil and Water or the Farm Service Agency and that adequate funding be made available for those agencies to accomplish that task.

·       We support increasing the proportion of the federal Farm Bill authorization devoted to agriculture and food research from approximately 2% of the total to 4%.

The organization’s state legislative priorities will be released in January.