Once upon a time, farm medic training for local EMS responders was held annually by most fire departments in Broome County.  Turns out, they had not provided this training in 15 years.  No one thought anything about it. 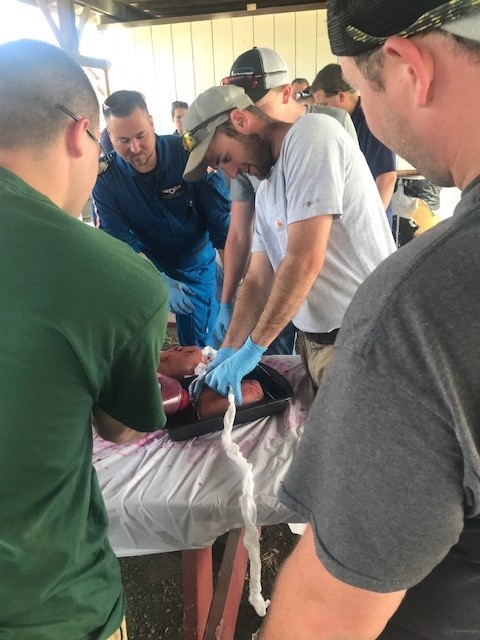 That all changed March 13, 2021, when Travis Flannagan, a Binghamton farmer, who lost both of his legs below the knee in a corn chopper while working on his farm.  With word of the tragic farm equipment accident and the lack of basic farm knowledge at the scene, first responders were asking where they could get the training. Broome County Farm Bureau responded with a generous offer to put together and host a farm medic class.

Contacts were made with New York State trained teachers, Broome County Fire and EMS staff and local fire departments. Plans were able to be quickly put into action to provide three days of in-classroom training and a hands-on skills class.  With the exciting addition of Life Net from Sidney, NY to the class, we also were able to offer a class on stop the bleed.

Community Support
Forty local EMS, fire fighters, and support personnel received explicit training on how to block and raise equipment safely for extraction, how to safely free a trapped victim from the equipment, and many other pertinent and related farm rescue information.

Class participants were using donated farm equipment from local farmers for their hands-on class. Support also provided by Broome County Agricultural Society for use of the County Fairgrounds for the event. The class was taught by Sherman “Lee” Price. The class was so popular, at maximum capacity, that there are already plans to do it again this Fall.
“The class was informative and provided a lot of good information for rescue personnel.  The combination of actual hands-on training as well as basic information taught in the classroom setting will undoubtedly assist the rescuers in the future if summoned to and agricultural accident”, according to Jeffrey Buckler, Fire Coordinator for Broome County.
The effect of this tragic accident to Flannagan has sparked broad reaching questions about his rescue.  If it had not been for a life flight from Guthrie Medical Center out of Pennsylvania, this story would have a far different outcome.

New York Life Flight Law
New York has a little know law that does not allow life flight rescues to carry blood products with them. This law has been on the books since the first life flights. Travis was fortunate that March day that the flight out of Sidney could not get to him.
Pennsylvania laws are different.  They allow blood products to be carried on rescue helicopters. The flight first responders were able to administer blood products to Travis and transport him to Upstate University in Syracuse.

I say Travis was fortunate only due to the fact that the helicopter change, from New York to Pennsylvania, saved his life.  He was able to assist the first responders in his own rescue.  You see, Travis also happens to be a Certified Registered Nurse Anesthetist (CRNA), and thus had a very knowledgeable medical background. He was able to talk them through what they needed to do.  His positive attitude helped bolster all those trying to take care of him that day. 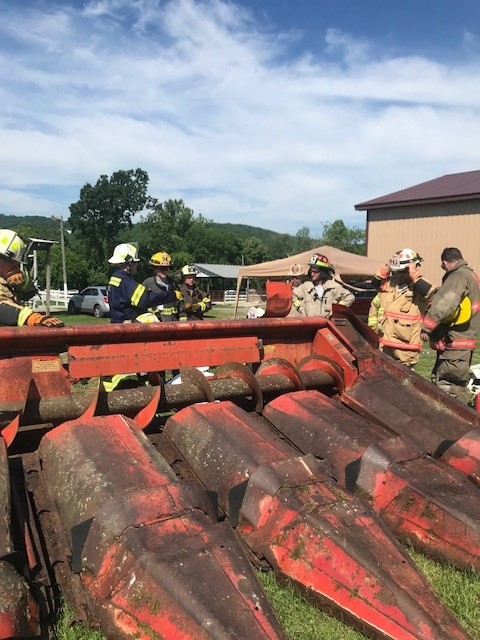 I have never meet someone like Travis Flannagan. The husband, father, son, brother, and amazing community member has changed the lives of many around him.  His spirit is unlike others. You get a sense of great peace being with Travis, with his calm and caring voice.

Travis started asking about why blood products were not allowed on life flights. His brother started a petition to get signatures to change the law. The whole process quickly got the attention of Sen. Fred Akshar, Assemblywoman Donna Lupardo and Sen. Michelle Hinchey, who simultaneously sponsored bills in their respective legislative chambers to begin making their way through the legislative process.  Both bills passed the Senate and Assembly, with members unanimously voting to change this long overdue issue.
Sen. Fred Akshar responded “The Broome County Farm Bureau’s outstanding farm accident training course helped dozens of first responders learn new tools to help those who find themselves in these life-threatening situations.

Numerous state and local agencies chipped in to make this a great success. I was proud to partner with my colleagues in the State Legislature to do our part to change this burdensome law as quickly as possible.”
Assemblywoman Donna Lupardo said,  “Learning about this legislation after a local farming accident where a man nearly lost his life. Luckily for him he was close enough to the state border that a medical chopper from Pennsylvania responded with blood on board.  New York has outdated laws that restrict air transport ambulances from storing and distributing blood.  It is long past time for this to change.”

Since the tragic day in March, our community has rallied behind Travis’ inspiring story and now it is the Governors’ turn to do what’s right to help save lives by signing this legislation into law immediately.

Photo captions: Attendees of a recent farm medic training in Broome County are taught to apply a tourniquet (top) and learn about safety with farm equipment (bottom).