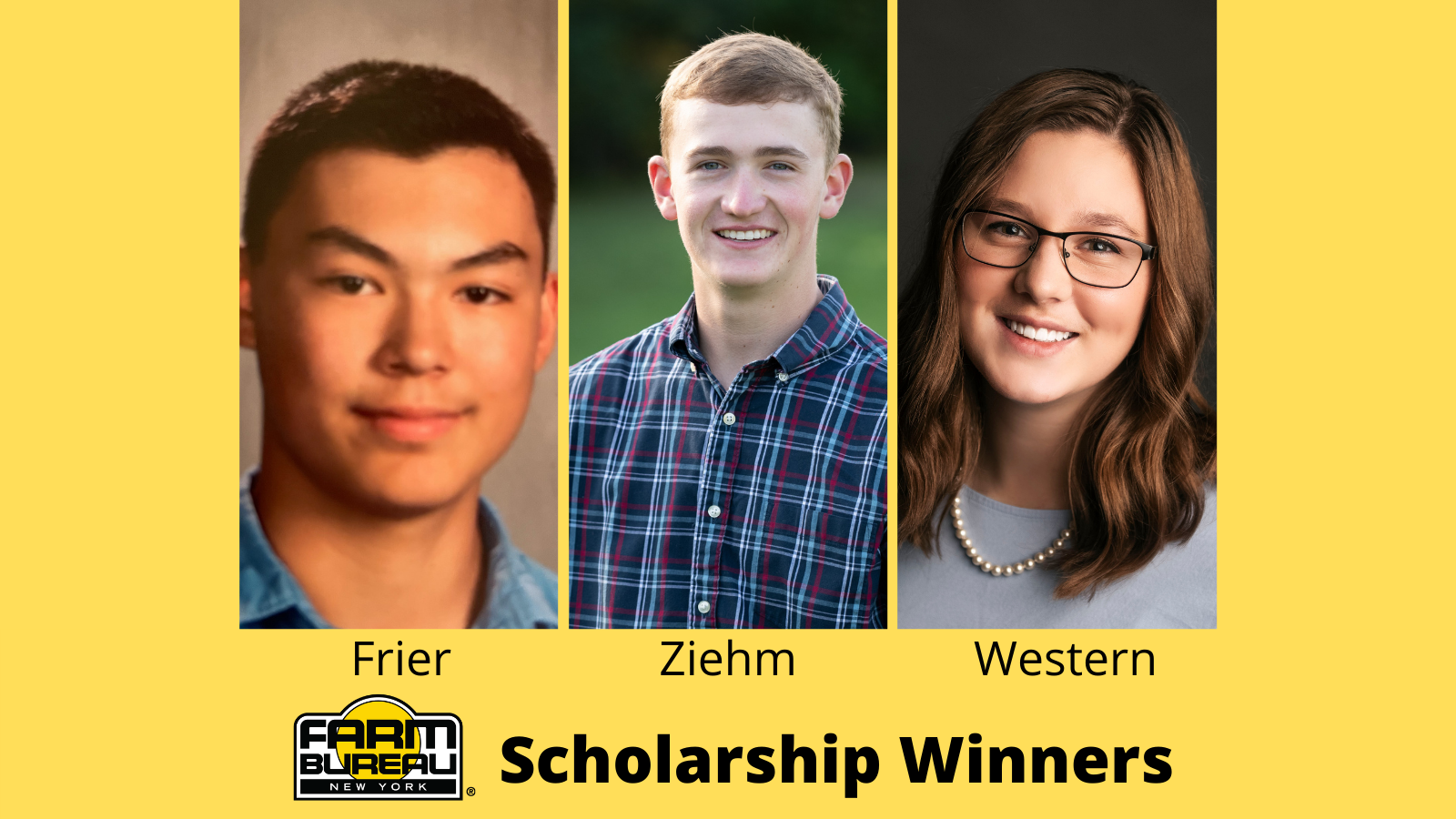 Three New York high school seniors have received the distinct honor of being named statewide winners of the 2021 New York Farm Bureau Agricultural Youth Scholarship. Each student received district-wide recognition and then competed for one of three statewide scholarships. The students must have a family Farm Bureau membership or a student Farm Bureau membership in order to qualify.  A panel of judges selected the winners based on their essay submissions, as well as their applications, which include their community and agricultural engagement.

The first-place winner is Dale Frier III from Seneca Falls, NY. He is a member of Seneca County Farm Bureau in District 3 and received a $1,500 scholarship from New York Farm Bureau. Dale attends the Finger Lakes Christian School. He will attend Patrick Henry College to major in American Politics & Policy or Pre-law. Dale has been active in his school serving as Student Body President and Vice President. He was a part of the competitively selected Cornell CALS PRO-Dairy Junior Dairy Leaders program and participated in 4-H Dairy Judging, Dairy Bowl, and the Dairy Challenge in addition to being active in the Seneca County Livestock and Artistry 4-H Club.

The second-place winner is Tyler Ziehm from Greenwich, NY where he is a member of Washington County Farm Bureau in District 8. Tyler received a $1,200 scholarship from New York Farm Bureau. He is a senior at Greenwich Central High School. Tyler plans to attend South Dakota State University to major in Dairy Production. During high school, Tyler has served as Chapter President of the National Honor Society and a member of the Varsity Golf Team. His FFA experience has included serving as Chapter President, Vice President, Student Advisor and NYS District 3 President. Tyler was also a member of Junior Dairy leaders and 4-H.

The third-place winner is Anna Western from Lowville, NY, a student member of Lewis County Farm Bureau in District 6. She receives a $1,000 scholarship. Anna attends the Lowville Academy & Central School/The Clarkson School. She plans to attend Clemson University majoring in Agribusiness. Anna’s school activities include chorus and band as well as being a Scholar Athlete (volleyball & tennis).  She has been very involved in FFA where she served as chapter treasurer and District VI President and received the Ashley Willits Leadership Award.

District winners receive a cash award and a gift from the New York Farm Bureau Promotion & Education Program. The other district scholarship winners include:

District 1: Emily Zehnder is from Glenwood, NY in Erie County. Emily attends Holland High School. She plans to attend SUNY Morrisville to major in Dairy Science with the goal of being a dairy farmer.

District 5: Brooklin Drake from Marathon, NY in Cortland County attends Marathon High School. Brooklin plans to attend either SUNY Cobleskill or Virginia Tech to major in agribusiness. Her career goal is to be an agricultural teacher.

District 7: Adyson Miller is from Chateaugay, NY in Franklin County and attends Chateaugay High School. She plans to attend Cornell University to major in Agricultural Science. Adyson plans to have a career as an agriculture educator.

District 9: Grace Dunham from Richmondville, NY in Schoharie County is a student at Cobleskill-Richmondville High School. Grace plans to study biology/public health/food science at either Cornell University or SUNY Geneseo. She plans a career in the Food Science and biology fields.

District 10: Macey Veeder-Shave from Hyde Park, NY, is a student member of Dutchess-Putnam-Westchester Farm Bureau. Macey is a student at FDR High School and plans to attend SUNY Purchase and study costume design and technology. Drawing from her background in wool production, Macey plans to have a career in historical costume reproduction.